What is Puppet ?
======================
Introduction to Puppet ,a software which is using for system automation and management. It manages your servers, your described machine configurations in an easy-to-read declarative language, and will bring your systems into the desired state and keep them there.Before talking more about puppet I want to refresh your thoughts about automation. The product is owned by puppet labs Inc the leader in IT automation .

What is Automation ?
======================
System automation is the use or introduction of automatic configurations , scripts or other process to perform the daily task automatically.

What to Automate ?
======================
Since the servers a infrastructure consist of a certain complexity and valuable data it will not be a wise decision if we choose a wrong thing to automate. So we have to consider few things before start with automation.

Choose the right thing to automate

Frequency : How often we have to perform the task. If the task comes very rare the effort to make those thing automated will be a waist.

Variability : How much similar the tasks are, more similar more easy to automate

Don’t Learn two things at a time : If we try to automate a technology or process in which we are not sounded enough. It will be very difficult to isolate the errors when things go wrong.That means we cant identify the exact issue, whether the issue is with the process we are doing or its with the puppet configurations.

Defining or changing a state of a system using puppet is done through four states or steps.

In this phase it compiles the manifests which written in puppet language it is more like a syntax rather than a language.The output will be normal objects and the compiling process is done at the server.

As the name represents in this phase the transporting jobs are done . The outputs from the compile state (normal objects) are transported to the puppet clients and the status update from agent to master is transferred after the execution.

In this phase the Introduction to Puppet objects are applied to the system and the system will get configured to the desirable state.

Puppet software is opensource and is released under the Apache 2.0 license .Puppet software version prior to 2.7.0 was distributed under GPL v2.0 . It is both available as Puppet free edition which is absolutely free and Puppet Enterprise edition comes with their official support and additional functionality.

The puppet files are available at Internet you can simply install it using yum by the help of Puppet repo or EPEL repo otherwise you can compile it by downloading the source file from the official site of Puppet Labs.

Facter is an independent, cross-platform Ruby library designed to gather information on all the nodes you will be managing with Puppet. It is available on all platforms that Introduction to Puppet is available. Basically factor is a lightweight program that gathers basic node information about the hardware and operating system. Facter is especially useful for retrieving things like operating system names, hardware characteristics, IP addresses, MAC addresses, and SSH keys.

Hiera is a key/value lookup tool for configuration data, built to make Puppet better and let you set node-specific data without repeating yourself.

You have to add puppet repo to your server

Please verify that following packages are getting installed

Check whether the puppet master is running in all required levels

Puppet will prefer to use settings from one of the three application-specific sections (master, agent, or user). If it doesn’t find a setting in the application section, it will use the value from main. (If main doesn’t set one, it will fall back to the default value.)

A fresh /etc/puppet/puppet.conf will look like this you have to edit it according to you needs.

A snapshot of configured /etc/puppet/puppet.conf 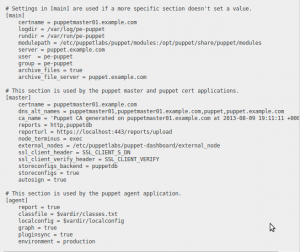 Puppet master and puppet agent communicate with each other over a pseudo-RESTful HTTP network API. By default, the usage of this API is limited to the standard types of master/agent communications. However, it can be exposed to other processes and used to build advanced tools on top of Puppet’s existing infrastructure and functionality. (HTTP API calls are formatted as https://{server}:{port}/{environment}/{resource}/{key}.)

As you might guess, this can be turned into a security hazard, so access to the HTTP API is strictly controlled by a special configuration file.

Each auth.conf ACL is formatted as follows:

Whether the ACL matches authenticated requests.

Most communications between puppet agent and the puppet master are authenticated, so you will usually be using auth yes.The value of auth must be one of the above options; it cannot be a list. If auth isn’t explicitly specified, it will default to yes.

With the Introduction to Puppet appends a list of default ACLs to the ACLs read from auth.conf. However, if any custom ACLs have a path identical to that of a default ACL, that default ACL will be omitted when composing the full list of ACLs.

This configuration file help us to create a file server in puppet by the help of which we can transfer static files into puppet agents. It will be very useful if you are planning to push same configuration files to multiple nodes. You can set up a file directory and set acl for them by editing these line in the /etc/puppet/fileserver.conf . Here I am allowing everybody so I gave * in the permission part.

The manifest directory conatians puppet programs with .pp extension in which the actions are defined. Its more like a syntax rather than a language . The default manifest is name as “site .pp” we can include other manifests inside that otherwise it only performs the action defined in site.pp.You have to write your own manifests according to your needs I am attaching few manifests and its contest below

The above command will create your aggent certificate and sent a the certificates to master for signing.

This command will list all certificates waiting for approval .You can see agent certificate with its domain name as below.

Now the Signing is completed. Now the puppet server will update the changes to the clients according to your manifests.